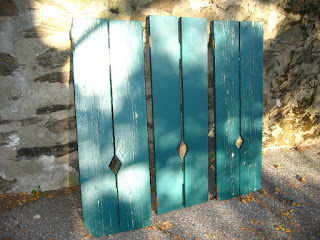 The old shutters. Left is the one that nearly fell off the house when the hinge rotted off. Same process happening on the right one. Middle is my first attempt at rebuilding the shutters c. 2004. It weathered well, but you can see I did not a great job. The central gap is way too wide, I was trying to compensate for the fact that modern 1x8's are not 8" wide. 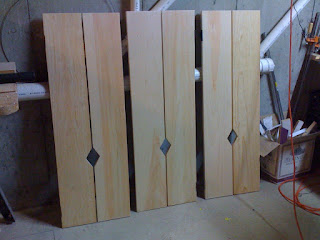 New version made form 1x10's. We used the ripped off extra to make the cross-braces. This photo was taken in my father-in-laws basement, where my father-in-law mostly manufactured them with all his nifty toys. Thanks Rami! 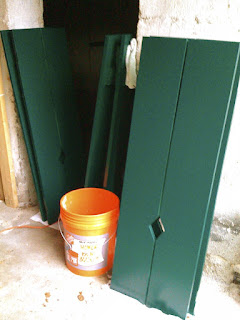 Painting was a long and arduous process. Here all six are finally ready to go after 50,000 coats of paint. 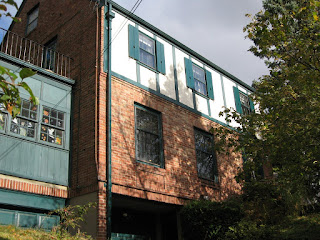 Hinges on, sealed, and painted... so they went up today. Hopefully they won't rot out the same way. The screws for the hinges were put in through a bead of silicone and them painted over in an attempt to keep the water from getting in that way.

Popular posts from this blog

January 22, 2007
We’ve really been hit hard this year!  I don’t think we’ll be able to get out to get food for  several weeks at least.  We’re scared.  We’ve got the guns to keep the looters away, but you know they’re going to either freeze to death or starve, so you feel bad... We are worried about the retaining wall collapsing. I had to climb out a third story window to get this shot. No plows, those are tracks made by the desperate.
1 comment
Read more

November 08, 2009
Renovation of the main downspouts. primer coat top coat the big downspout, straight as an arrow. a more informative view of the big downspout. detail of the bracket cover. I enjoyed a day hanging downspouts with dad to wash away the conference fatigue. March 14, 2010: first rain storm of the Spring! The sluice worked like a charm. Note that it's overflowing. I need to repair the other barrel and figure out a solution for the overflow. Detail of the sluice. I set up the first barrel, went into the garage to find the hoses to hook up the second, and by the time I got back it was already half full: that's how fast it's coming down today.
Post a Comment
Read more